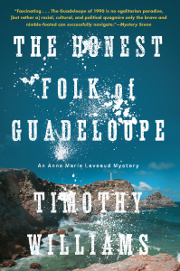 April 1990, Guadeloupe: The body of a female French tourist has been discovered on a nudist beach. The victim’s remains offer no clues about her final hours. What turned this woman’s vacation in paradise into a nightmare? French-Algerian judge Anne Marie Laveaud is assigned the high-profile case. As always, the story of a murdered white woman has attracted the attention of international media. The economy of Guadeloupe, so dependent on the tourist industry, could suffer a terrible hit if this case isn’t brought police work.

The Honest Folk of Guadeloupe by Timothy Williams is published by Soho Press, New York (USA).