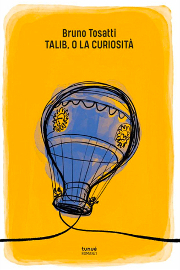 Talib is a refined literary novel, inspired by the Thousand and One Nights and Voltaire's Candide.

A poor polisher of knobs at the court of Babylon, Talib is a young man with a noble soul. According to the ancient manuscript found by the author, Talib falls in love with the king's daughter, but it is established that only the one who will bring to the king a diamond the size of a bull's head will marry the girl.
So Talib sets off on his journey in search of the stone, and makes numerous bizarre encounters. He meets the racist Miralem, a tax collector in the world of clouds; he meets Nizar, a monk hostile to the Desire; he negotiates with the Dragon of the Swamps; he visits the metropolis with asparagus-shaped pinnacles; he reaches the Moon to retrieve a bottle of shadow; and he will be lucky enough to attend the show of the slowest traveling circus in the world.
A long journey dictated by love, but fueled by curiosity.

Back to Top
We use cookies to ensure that we give you the best experience on our website. If you continue to use this site we will assume that you are happy with it.Ok